This morning we had our second photographic tour; around Central Park. It had snowed the day before so the park wore a patchy blanket of snow. It was one of those “aaahhh” moments for me even though it was freezing – it was so pretty.

To join our tour we took the Subway from 50th St to Central Park, the red line going uptown (for those contemplating a trip to NY). The NY subway is fast, frequent and interesting. More subway stories later though. It was only one stop to 59th St and a short walk to where we were meeting Troy and Maryanne. We were early so took the opportunity to take a few photos of our surroundings whilst being hassled intermittently by Pedi cab drivers wanting to take us around the park. One in particular kept coming by and asking if we wanted a ride, we laughed and told him he must have a memory issue as there weren’t that many people here at 9.30am on a bitterly cold morning and he’d already asked us 2 minutes ago! I suppose he thought if he kept asking we’d eventually give in.

Four squirrels were out playing in the snow and only stopped moving if a dog wandered past. A dog walker with 10 pooches of varying sizes passed by and we were amazed at how well behaved the dogs were, all walking in unison, no arguments or nipping at each other’s heels. On the other side a little dog walked by wearing a lovely beige overcoat and little bright orange booties…..it walked very gingerly lifting each foot in an exaggerated fashion; obviously the booties were not an accessory this pooch had chosen.

Maryanne and Troy arrived at our meeting point and we continued on to General Sherman’s statue at the other end of the park to meet Rob, our photo tour guide. Rob was lucky enough to be our guide 2 days in a row…..he mightn’t think he was lucky though. The Central Park tour was a 3 hour walking tour with lots of different subject matter to photograph with Rob critiquing all our camera work. He took us through the manual settings of each of our cameras and told us the best settings to use for each subject. The winter park scene was quite spectacular as I’m sure the summer scene would be with all the greenery. The park is quite amazing with bridges and arches, sporting complexes, a bandstand and many walkways. The lakes and water features also presented a pretty winter scene. There were underpasses with buskers playing, one archway had a choir singing Christmas carols. The park was man made, is still evolving and spans a massive area. We walked through many areas of the park to photograph set subjects, even though it felt like we’d walked the entire park we had hardly touched a small portion of it. We started at general Sherman’s statue on one side and ended the tour across from the Dakota Building. A small square section of the park, I think….as most of you would be aware, direction is not my strong point….so I couldn’t tell you whether we were on the North, South, East or West side of the park….sorry about that!!! 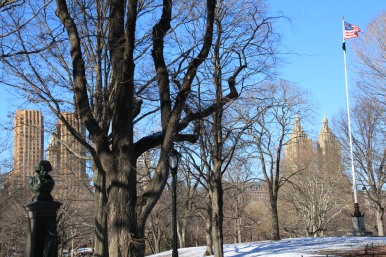 People standing in a tunnel

One of the lakes in Central Park

Rob, our guide, wore jeans and a light hooded jacket, no gloves or scarf so by the end of the tour his hands were shaking and his voice was affected by the bitter cold. We were wearing that many sets of clothing it was hard to walk at times and here was our guide dressed for a cool autumn day. The question had to be asked “Aren’t you cold? It’s freezing and you’re hardly wearing any clothes.” The answer “it’s difficult to be rugged up with gloves and scarves when I have to help with camera settings and take us through the instruction book”. We all nodded in acceptance of his answer. Each one of us thinking the same thing…we’d find a good reason to stay indoors!! Even though the skies were blue and the sun was shining it was still extremely cold but we were thankful it wasn’t raining or snowing like yesterday.

After the tour four frozen and hungry individuals made a b-line for the Time Warner shopping centre. The eateries on the lower level were overflowing with people so we headed upstairs to the 2nd level and were lucky enough to nab a table. Well, should say we hovered over a table where a young guy was packing up his books. Maryanne and I stood close enough to ensure we could claim the table ahead of any other contenders. Yes, it was like a game of sorts and after walking for the past 4 hours we were entitled to that table and the seats!!!! I was ready to tackle anyone who dared try and take it from us.

Maryanne ordered soup for lunch and when, after a long wait, opened the container only to find it was lukewarm, we talked her into taking it back and asking them to reheat it…..Yes, I know what you’re thinking but no one can eat lukewarm soup. When the soup came back it was boiling, we thought they may have made it even hotter on purpose!! Tables and chairs were so much in demand that just looking like you were getting up had others rushing over to take your place. The saying ‘would you jump into my grave as quickly’ comes to mind.

Maryanne and Troy transferred to the Crowne Plaza (where we were) this afternoon which meant a couple of hours relaxation time for us whilst we waited for them. Once they checked in Troy wanted to visit the M&M store across the road so three of us trotted over to the store. Can you believe it – we had to line up further up the road, “this is mad, I can’t believe I’m lining up to enter an M&M store” I laughingly said to my companions, “I don’t even like M&M’s particularly”. I was amused at the lines to get into the Hershey chocolate store at the corner of our hotel now I’m standing in a similar line!!! The store is 3 floors and was packed with people, we could hardly move, troy likened it to an Ikea store!!! Perhaps that was because we were walking round in circles or so it seemed. Given we were in the store I felt compelled to purchase a small bag of M&M’s, I don’t even like them that much but after lining up to get into the store and then fighting the crowds on every floor of the store I couldn’t leave empty handed could I??

As we left the store the numbers of people on the street had increased considerably and it wasn’t NYE yet. That evening we left our hotel to go to dinner….we’d decided something light was in order for dinner…..ok, where to go? We headed to the other side of Times Square to see what was on offer but we could hardly move for people. Every eatery was jammed with people; McDonald’s had crowds lined up on the street trying to get in and inside was a sea of people. There was no choice but to keep walking, further and further from Times Square, trying to find a place that wasn’t packed to the hilt. Eventually, after an hour of walking, we came across Rosie O’Grady’s and it wasn’t as busy as other places so we went in. Within 10 minutes we were seated at a table ordering drinks….

Troy seemed to have a disarming effect on the waitress, so much so she couldn’t think straight; instead of bringing more drinks she brought another basket of bread rolls. Eventually his glass of wine arrived in front of him. We thought we might order dessert so asked the waitress for the dessert menu. A short time later the waitress arrived with every dessert available on a large tray. We all took one look and I decided against it, seeing large dishes like that will always dampen my appetite.

All too soon it was time to step back out into the cold night not before we take another 10 minutes to put all our scarves, ear muffs, hats, coats and gloves back on. Takes ages to undress and redress when you step into shops or restaurants. Needless to say and I know this will shock everyone, I haven’t purchased any clothing at all…..nothing, nil, zilch!!! The thought of taking off all these clothes to try on other clothes then put them all back on again fills me with horror. Actually, since arriving in New York I haven’t bought much of anything, including souvenirs. Note to self; must rectify this problem.

Stepping back out into the street the bitter wind hits us in the face, so icy anyone would think we’re in the arctic. The crowd on the streets has thickened considerably since we went into the restaurant, my goodness, if this is the day before NYE NY will be at a standstill around this area tomorrow night. We have to push ourselves through the crowds to get back to our hotel on Times Square. This many people in this small area is a little scary. 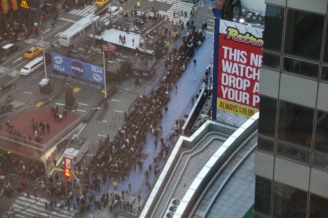 View of Times Square from our room. People started lining up for NYE ball drop on 30th Dec.

Finally we make it to the front door of our hotel….it’s almost 10 pm and we left the eatery around 9 pm, almost an hour to walk 3 or 4 blocks. How mad is that? So far I’m really enjoying this city, it’s a great place, so much to do and see. Right now though, it’s time to get warm and go to bed ready for another very busy day and night tomorrow. Hopefully I will sleep longer than 4 hours – still waking up at 3.30 or 4 am which, as you can imagine, is really annoying.

Goodnight from me……happy New Year to everyone welcoming the New Year before we do.