Changi airport is advertised as one of the biggest and the best in the world. It certainly felt like it as we stepped into the arrivals hall to complete our customs declaration forms before passing border control. The size of this area was overwhelming. I felt like an ant that had been taken from it’s nest and dropped onto a large shiny island. We had just stepped off a plane with at least 340 or more individuals but where were they now??? No one in that hall but the 4 of us and 6 border control officers. We stepped off the flight with everyone else so it just seemed strange that people had moved on so quickly.

We hadn’t booked transfers this time, after researching the cost of private transfers and a taxi van it was much cheaper to hire a taxi van in Singapore. Four of us and all our luggage was S$60. Although when we booked one for the return journey we agreed with hotel reception that it would be the same price. However, as is often the case for foreign tourists, Ty double checked the cost with the driver before we drove away and he said, “No, it’s $65”. So before we went anywhere the driver and Ty went back into the hotel and when they returned to the taxi it was $60. It wasn’t the extra $5.00 that was at issue it’s being taken advantage of and that’s the main reason I generally pre book private transfers. If all tourists put up with drivers adding extra to the agreed fare, once they have you in the taxi, this practice will continue. We all need to stand up for fair play.

Our hotel was near Clarke Quay and unfortunately the reviews and pictures did not prove to be correct in this instance. The hotel,at first appearance, was disappointing with the reception area looking like a backpackers hostel. Perhaps it will improve, I thought, ever the optimist. It didn’t, the rooms were of a similar size to hotels in some parts of Europe. The bathroom was tiny and as with the main bedroom was badly in need of renovation. It was clean, bed wasn’t too bad and we had quite a good view from the large windows. It was only for one night so we would manage. Although Maryanne had a slight problem with the shower. In their room. The shower head was angled in such a way that you had to be at least 5ft 8ins for the water to cascade over you. Maryanne had no chance luckily the shower could also be hand held but washing her hair was out of the question!

The hotel is old and dated however we did find out the hotel is undergoing renovation and so far floors 1 to 4 had been completed unfortunately we were on the 8th!! It’s situated in an area not far from Orchard Road with many restaurants and bars.

The weather in Singapore,as usual, was very hot and humid with a late afternoon storm. We decided to take a Hop on Hop off bus for the day, see the sights and hop off somewhere in the Orchard Road shopping area. Mind you, we weren’t shopping just looking – we have 2 days to shop on our return. Do you know how many shopping centres there are just on Orchard Road? I don’t either, way too many to count! How many did we set foot in?? Three or four. Did we manage to keep our money firmly hidden and untouched in our wallets?? Of course…..not!!! Well, Ty and Darelle did but Maryanne and I just couldn’t resist a bargain!!! We did well though ‘cos we didn’t shop until the fourth centre….not too bad….we showed restraint early on, only weakened when the bargain was too good to ignore!!!!

What really struck all of us was the emphasis on food in Singapore. Restaurants, cafes, bars everywhere, practically every second store. The shopping centres appear to have a large number of food courts on each floor. Some centres had more focus on food vendors than other retailers.

The Sphere (similar to London Eye) has a High Tea available and given I’m partial to High Teas I thought this might be a possibility on our return. Raffles was also on the wish list but I think the Singapore Sphere would be very different……High Tea on a gigantic slow moving Ferris wheel just has to be done!!!! I’ve decided that this holiday will have a High Tea theme.

We had a late flight out to London so decided to pay for a 6pm checkout which would allow us to shower and change for the flight.

We had dinner at an Italian cafe!restaurant at the airport, food wasn’t too bad, at least it was cooked for us not mass produced and sitting in a Bain Marie, and we could get a wine. The cafe had one fault …… no ice cream!!! How rude, it was one of these times when we just felt like ice cream. We were intent on finding some sort of ice cream and we did… As we rounded the corner there was Burger King, flashing lights and all. “Four chocolate sundaes please” we told the cashier. We collected our sundaes and sat down to watch the passing parade. Not a large passing parade though as BK is at the end of a corridor.

Time to board the plane for the next leg….hopefully both Ty and I will be able to get a few hours sleep as we’re driving to Edinburgh immediately after we arrive at Heathrow in the morning. 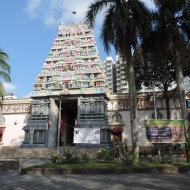