Donegal and Sligo had been on my list of places to visit for many years. I’ve visited Ireland at least 7 times and never ventured further than Galway and the Aran Islands on the west side so this holiday I was determined that we would visit Donegal. We by passed Dublin altogether

My sister wanted to visit her uncle in law, Billy, in Belfast again so that fitted in easily to our little touch of Ireland trip. We could fly across from Paris, spend a couple of days in Donegal and surrounding areas, then drive on to Belfast for a couple of days and that was the plan. However, Darelle wanted to go to Waterford to purchase Waterford Crystal from the factory shop…..I suggested that our retailers, Myers and David Jones sold Waterford Crystal at home but her reply was “No, I want to purchase the figurines from the factory shop in Waterford”. “Why?” I asked “So the recipients of the gifts know I went to Waterford and purchased them”. “Ok, I’ll look at that option” I said.

The plan was now to go from Paris to Donegal via Waterford. We flew from Charles De Gaulle to Cork, picked up a hire car and drove to Waterford where we stayed overnight. The factory store opened at 9am but not wanting to look desperate we arrived at the store about 9.30am. We spent an hour in the store…the array of crystal items was amazing and many items were 1000 euros plus…so don’t pick up the items and look very carefully and don’t swing that handbag around too quickly. Many of the pieces were very extravagant and the champagne and wine glass offerings were beautiful. I was tempted but resisted due to price mainly. Darelle found the necessary figurines and, unfortunately, I also found an item I rather liked….a crystal vase shaped a little different to others and perfect for holding my roses….. Did I say ‘a’ vase? Well, I couldn’t buy just one, could I? I had to have a matching pair – well, what if I had enough roses in my garden to fill 2 vases? Ty also fell in love with a figurine of a teddy bear so I threw that in as well. God knows where we’ll put it…but I’m sure we’ll find a place! So several hundred dollars later and the goods organised to be shipped by Waterford we left the store.

Amazingly the amount spent doesn’t seem too bad when you walk out without the goods in your possession…easy to forget you’ve spent any money at all!!!

It was 10.30 and time to leave Waterford for the 5 hour drive to Donegal. We were literally crossing Ireland in a diagonal from east to west and hoping the weather would improve as we drove further west. We weren’t being at all realistic because everyone knows the West Coast of Ireland can be extremely wild and mostly has every season within a day. The weather in this part of Ireland shows no regard for the seasons, actually the weather in most of Ireland shows no regard for the seasons.

Our rental car for this part of the journey was an Audi A4 – we had been given an upgrade as Hertz couldn’t find the rental car we had booked. Unfortunately, although they appeared to be quite generous they did find it necessary to place a hold of 2,500 euros in case we damaged the car. Given we have already paid an insurance that covered an excess of $2,800 this extra hold charge was unexpected and, in all the years of hiring cars in Europe, has never happened before. Anyway, not much we could do about it…the rental for the week was 406 euros. Moving on!!

Ty was enjoying driving the car so much so that on the road between Enniskillen and Donegal he thought he was in a rally! We stopped at a small town for a quick lunch and continued on our way.

At this time of year the flowers in the gardens and hanging baskets are quite beautiful, multiple colours are used to make spectacular displays. Some houses had flower gardens and baskets to match the colour of the trim around windows and doors. So much thought and care goes into these displays and it isn’t just one house but practically every house in every town. The towns also have their displays in the parks, hanging from lamp posts and in large pots in the main squares around town. I would love to have those displays in my garden in spring and summer but the heat and my forgetfulness to water the blooms would be the downfall.

So I tend to take hundreds of photos of the floral spectaculars that I see on our journey and dream about being able to have our home looking this good.

When I booked our accommodation in Donegal several preferred hotels were booked out, in fact most of the places in Donegal town were booked out. I didn’t want to place us too far out of town because we prefer to park the car at our accommodation and wander around the town, walk to dinner or different pubs for a drink. You can’t explore a place if you need to drive everywhere! So, back to the accommodation, the only choices we had was for a B&B or a couple of hostels. I am not a hostel person even in my younger years hostels were not for me even if they promised en suite rooms. The lodges and B&B’s were an ‘eny, meny miney mo’ exercise……..a few review reads and working out distance to town I settled on the Railway Lodge. It looked ok on the web page and reviews said it was a short walk to the centre of town so I booked it.

Driving into town was a little slow, there was a slight traffic jam – nothing compared to our traffic jams of course.  Donegal is a very old town and Donegal Castle is in a very central position in the town. Donegal Castle on one side of the road, a Church of Ireland on the other side with the Old Castle Pub sitting strategically in front of  the church.  A pretty town with a central square…….all the shops and pubs border the square on 3 sides.

We drove along one side of the central square continuing on past the castle and the church across the bridge and started to head out of town.  We rounded a slight corner and saw the railway station ahead as it came into view we saw the sign for the Railway Lodge on our left.  As we drove into the parking area I thought it a little less impressive than the website photos but isn’t that often the case?  At this moment, as I took in the 3 storey residence, a horrible feeling came over me.  “What’s the bet we’ll be on the top floor with no lift” I thought to myself not game to mention my thoughts out loud at this point.

Ty turned the ignition off and we sat there for what seemed like minutes but was only a second or two then he said “So you’ve booked us into an attic room with no lift have you?” I looked over at him and at the house and said “I hope not, I didn’t have much choice of accommodation in town”.  “Hopefully we’re not in the roof” I added.

“We’ll, you had better go to check in and see where our rooms are whilst I unload the bags” Ty replied. 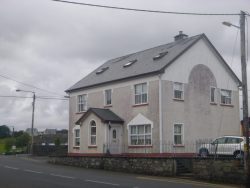 Darelle and I went in and, the lady of the house, Sheila, met us as we stepped into the hallway.  Sheila welcomed us warmly and then said, apologetically, your rooms are on the very top floor.  “Really” I said trying to sound jovial even though I was not happy.  Sheila apologised again probably my face showed my disappointment or because Sheila realised we weren’t young people here for the championship regatta being held in Donegal.  We had no idea what was on just that the town and surrounding area was fully booked. Sheila asked if we had much luggage…”we’re on a 5 week holiday we have lots of luggage” I replied with a smile (I hope).

I went outside to give Ty the good news and help with the luggage.  My poor husband was not happy as he knew he was the one to carry all the bags up all the flights of stairs.  Each of our bigger bags weighed over 20 kilos each and we also had hand luggage! There were 3 sets of stairs each containing 8 steps there was also 2 landings.  Ty had to navigate these stairs 6 times (3 up 3 down).  At least he’d reach his 10,000 steps easily today so there was a positive.

As he stepped inside with the last piece of luggage the lady of the house apologised again that we had rooms up in the roof cavity. I guess with B&B’s it doesn’t matter when you book as to what rooms you are given but when you arrive.  We were the last to arrive that day so we were relegated…lol.  Oh well, we’d enjoyed 3 weeks of 4 and 5 star it was time we came back down to earth I suppose….

Ty eventually got all the luggage up to the rooms…he wouldn’t let us help..that was his job he said. Well once we got the bags in the rooms there was not much room for anything else.  Darelle had a single room and it was indeed a single room….very small and cramped.  Ours was a little better but the double bed was up against one wall so one of us would have to climb in and out….that someone was Ty ….it was his side of the bed.

We all had a very sleepless night and the next morning, before we went down for breakfast, we told Darelle we were going to find somewhere else to stay tonight as we couldn’t stay in this room and she couldn’t be squashed in her room again either.  She agreed.  At breakfast Sheila asked how we’d slept … I said not very well as the rooms were a little uncomfortable….I also mentioned the fact Darelle could hardly get into the shower in her room because the cubicle and the shower screen door opening was so small. We did laugh mainly because the vision of my sister (who is not a big person) trying to squeeze herself sideways into the small shower cubicle with great difficulty was amusing.  I did not mention to Sheila that Ty had trouble crawling down and out of bed in the middle of the night for a loo break.  My husband is not the most agile person so this exercise took some time for him to manoeuvre his frame to the end of the bed.  All the while he would have been trying not to disturb me…such a thoughtful man.

We did laugh at our plight when speaking with Sheila – we made it a lighthearted conversation but we also had to be honest.  Sheila went back to the kitchen and when she returned a couple of minutes later she offered us other rooms on the floor below.  People were leaving today and she was happy to move us to a bigger more pleasant room.  I asked if Darelle could be moved to our room because that room, although not good for 2, would be ideal size for a single.  Sheila said she would move Darelle downstairs as well next to us later in the day. We thought that a fair and reasonable offer so we agreed.

Before heading out for the day we went up to our room to complete packing our bags so we would be ready for the move.

Today we’re taking a drive to Sligo, Bundoran and Slieve League along the Wild Atlantic Way…..